With the buzz around cryptocurrency, you too must be planning to invest into it in 2021 so that you don’t miss the bus? However, high chances are that it may seem financial jargon, and you aren’t sure if it’s an alternative currency? A technology? Or a bubble?

Through this report, Lakewater Advisors tries to give a picture of cryptocurrency and our India’s stance on it. We hope after this, you would have a better understanding of the much-talked-about financial investment option.

Cryptocurrency or “Crypto” is decentralized digital money that is based on blockchain technology and is encrypted. It is created to purchase goods and services. However,

– It is not redeemable in return for another commodity (like gold). – It doesn’t require a third-party record keeper, thereby eliminates intermediaries.

All cryptocurrency transactions are stored in a digital public ledger as soon as they are created. The identities of coin owners are encrypted to ensure the legitimacy of record keeping. As the currency is decentralized, you own it, and neither the government nor the bank has any control over it. 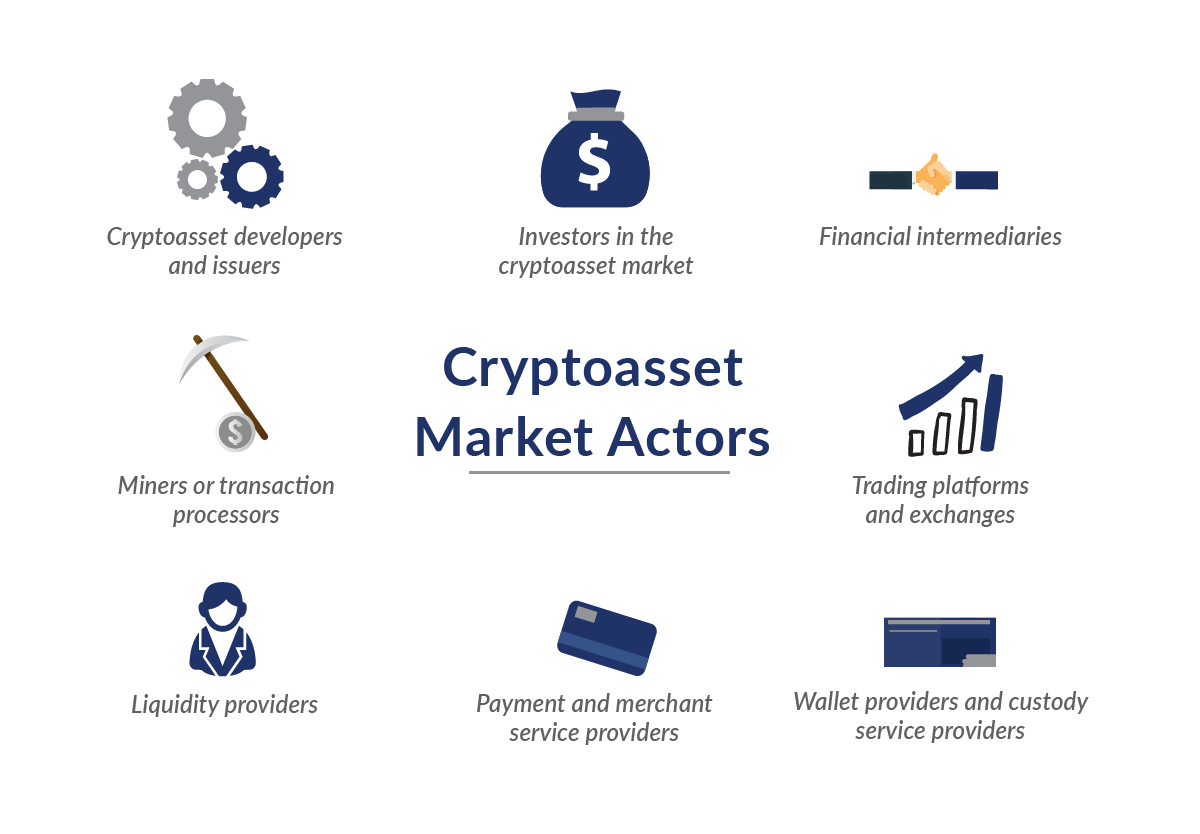 Market Capitalization and Crypto Returns over the Decade

The world is moving at an accelerated pace. Microsoft took 44 years to reach a market capitalization of $1 trillion, Apple took 42 years, Amazon took 24 years, and Alphabet, 21 years. While Bitcoin, the most well-known cryptocurrency, took less than 12 years to reach this milestone (April’21). 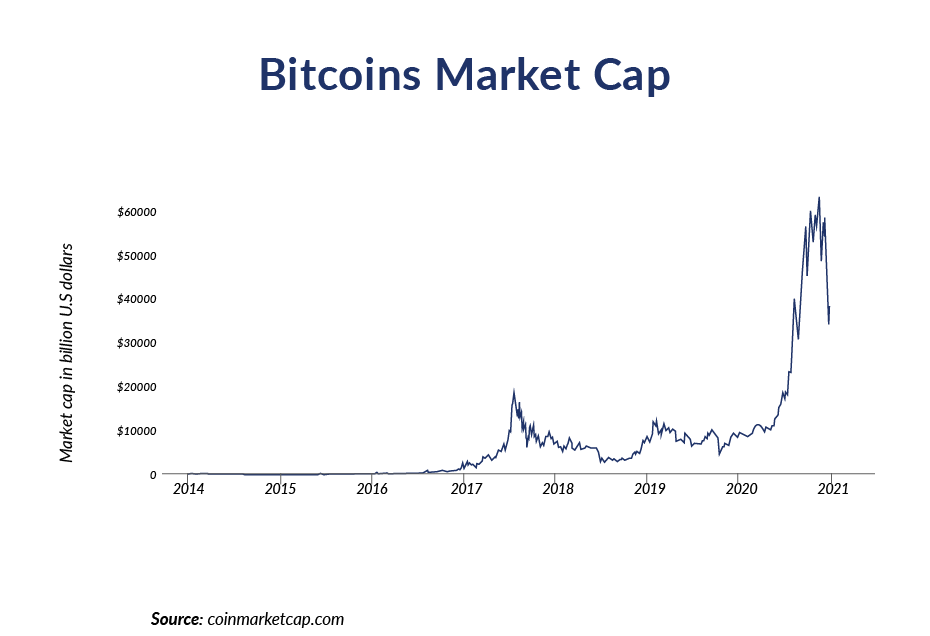 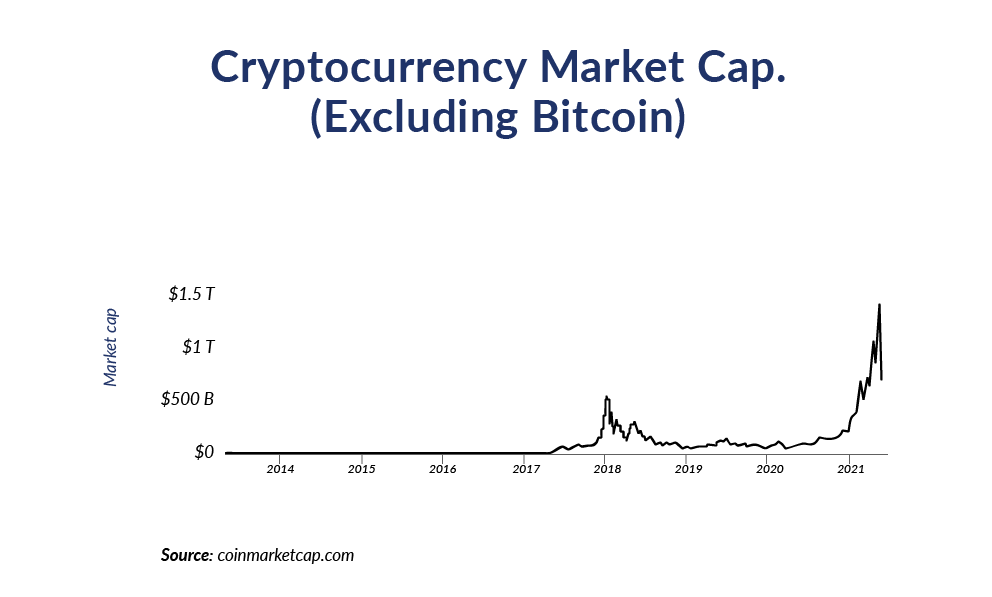 Back in 2016, the cryptocurrency had a market capitalization in the $100 -$200 Million range. And within five years, it has touched $2 Trillion. A significant change is predicted in crypto as institutional money enters the market. In addition, speculations are there that cryptocurrency shall be part of NASDAQ soon, which will further add credibility.

Stance of Major Economies with regards to the use of Cryptocurrency

Investing in cryptocurrencies is legal in some countries and illegal in others, and this has raised a question on cryptocurrency’s reliability.

Countries such as United Kingdom, Singapore, Indonesia, and Canada have regulated the use of cryptocurrency. In the United Kingdom, cryptocurrencies are as a medium of exchange. However, they recently recognized crypto-assets like Bitcoin as property under UK common law.

Similarly, trading in cryptocurrencies is legal in Canada and Singapore under their country’s securities norms.

Indonesia is a unique case wherein cryptocurrencies were initially banned in 2018 and later legalized in 2019 under the ambit of anti-money laundering (AML) combating the financing of terrorism (CFT) norms.

China’s announcement further prohibits financial and payment institutions from providing cryptocurrency services. Also, warning statements have been issued by the Saudi Arabian Monetary Agency against trading in virtual currencies as they are out of government supervision and aren’t approved as official currencies.

United States, India, Pakistan, and Brazil have proposed to imply regulations on the use of cryptocurrency. The Financial Crimes Enforcement Network of the US Treasury Department has issued a draft law requiring virtual currency operators to maintain records and verify the customer’s identity in transactions involving virtual currencies or digital assets to combat illicit uses of cryptocurrencies. The Cryptocurrency and Regulation of Official Digital Currency Bill, 2021 is too under process in India.

The European Union (EU) Commission has introduced a directive to control trading in crypto-assets and support digital finance in all EU states. In addition, France, Switzerland, and Germany are moving towards cryptocurrency regulation and have started enacting laws on the same. 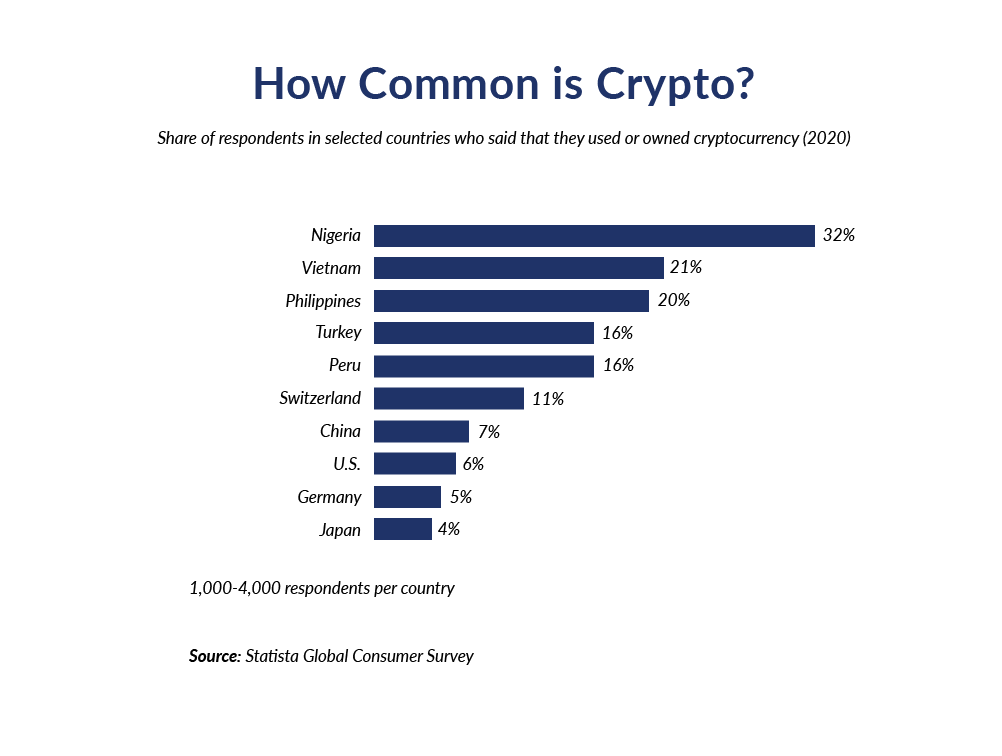 The recent volatility in cryptocurrencies has made Bitcoin decline to $30,000 on May 19, 2021 from its peak of $64,870 on April 14, 2021. However, this isn’t the first and not the last time that Bitcoin has shown such volatility. Be it a tweet by Elon Musk, a change in a country’s regulation, or random advice, cryptocurrency sentiments are hugely impacted. 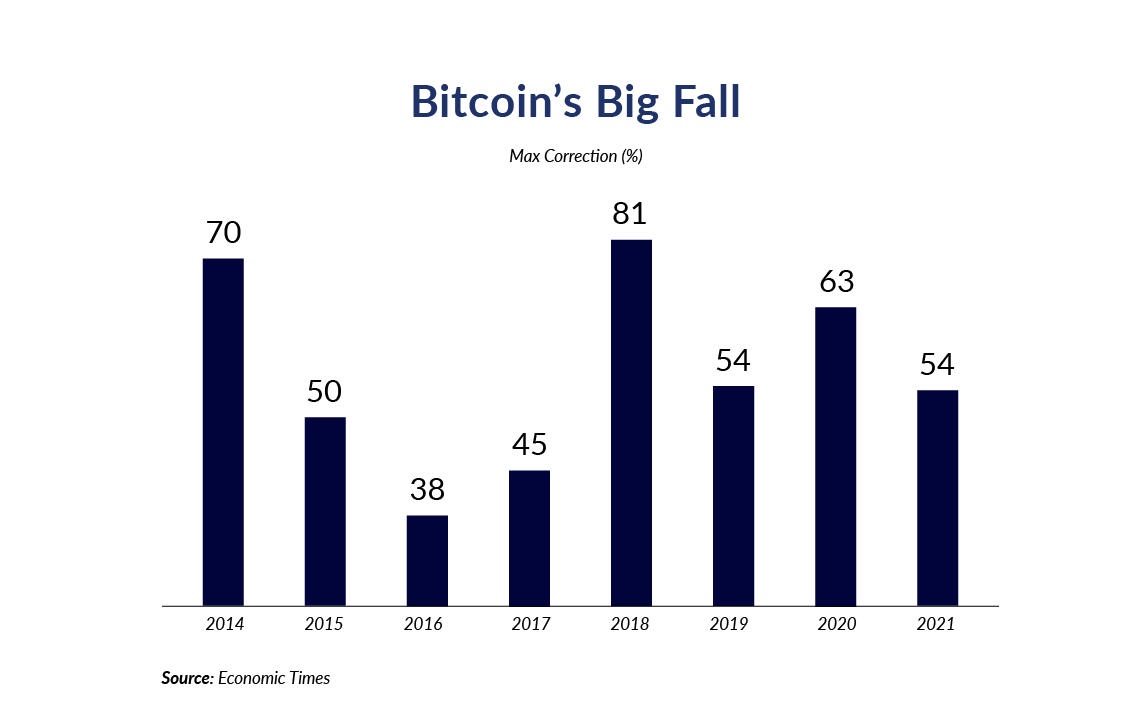 Lately, Elon Musk declared that Tesla should no longer accept Bitcoin as a form of payment, a reversal of policy introduced earlier this year. Elon Musk took this call-in context to the environmental concerns related to Bitcoin mining. This announcement had immediately plummeted the value of coins. He then later suggested that Dogecoin may be a payment option for Tesla as he works with Dogecoin developers to improve system transaction efficiency. His tweets led to a tremendous surge in the prices of Dogecoin.

Another event that approximately called for a 30% fall in a day and shook the crypto-world was the Beijing crackdown. China’s latest decision bans financial, and payment institutions from providing cryptocurrency services has further tightened the restrictions. This volatility isn’t the first time; China has banned crypto-related financial and payment services. Beijing issued similar bans in 2013 and 2017. The repeated bans ensure the closure of loopholes and stop the impact of the global crypto wave in China.

A Look at India’s Crypto Situation

In 2013, the cryptocurrency had made its mark in India, and the tech-savvy retail investors were savoring them. However, due to the unregulated market, certain people took undue advantage and started unlawful activities.

As a result, RBI issued a press release that the central bank does not back virtual currencies and a second press release in 2017 reiterating those concerns. Since, back in 2018, it was at a nascent stage, there was no regulatory framework. Therefore, the Indian government took the required steps to stop providing services to entities associated with virtual currencies to control illegitimate practices.

However, the advancement of cryptocurrency in regulated countries like Singapore, United States, made India reconsider their decision. As a result, Supreme Court quashed their banking ban in 2020 under the plea of the Internet and Mobile Association of India (IMAI). Supreme Court stated under the purview of Article 19(1)(g) of the Constitution; it is the fundamental right to carry on any occupation, trade, or business.

RBI isn’t comfortable with the idea of cryptocurrency and has already raised its concerns. There is a lot of confusion in India, yet the reluctance and indignations are wearing off in India at a steady pace. And Indian government is exploring steps to adopt cryptocurrency.

In January 2021, the government introduced the Cryptocurrency and Regulation of Official Digital Currency Bill, 2021 (the “Crypto Bill”). This bill intends to ban “private” cryptocurrencies in India with certain exceptions to push the cryptocurrency’s underlying technology and provide a framework for creating an official digital currency issued by the Central Bank of India. If the proposed Crypto Bill becomes law, India will officially ban private cryptocurrencies rather than regulating them like corporate stocks. This has given positive sentiment to the crypto industry since the government might soon set up a new panel to decide regulations.

The crypto market in India then started budding, and the retail investors are acting as a catalyst to it. And the number of investors was snowballing with every day and made a space in the investment landscape. The government needs to conclude soon to avoid repercussions like unregulated Chit Funds. There have been many examples of microfinance and gold loans, where the lack of regulations has led to a crisis.

With pioneering regulation, India can grab what is likely to be the biggest economic opportunity of the decade. Our progressive neighbors like Singapore and Dubai and allies such as the United States and Germany have already cashed this opportunity with regulation. Implementing cryptocurrency shall eliminate intermediaries, lower transaction fees, support international trade, provide better security, and give individual ownership.

Additionally, the outbreak of the COVID-19 pandemic is one of the most vital impetuses to the growth of cryptocurrency start-ups in the world, especially in India. As a result, contactless transactions have become a custom. Owing to this norm, most of India is comprehending the growing importance and need of crypto to shift towards the crypto ethos.

Further, the renowned CEOs have begun to show their interest. And with the deep talent pool in the software industry in India, we have a whole generation of crypto entrepreneurs. India was late to the dot com party, but it is currently well placed to grab the opportunity to create new business, wealth, and jobs. This once-in-a-lifetime opportunity should not be denied to our entrepreneurs.

Mr. Nischal Shetty, CEO WazirX, said, “There are over 1.5 Crore Indians holding over 1,500 Crores worth crypto-assets. WazirX signed up 1.1 Million users and recorded a volume of USD 5.4 Billion in April 2021 alone. India is no longer a niche market but a rapidly growing financial market. However, despite the growth in crypto adoption, India is behind in both regulations and several successful crypto start-ups. India needs its crypto unicorns and better regulations, and for this, we must encourage our entrepreneurs to build for crypto.” He further added that “The Indian crypto industry is eager to help the government formulate the right regulations so that India can stay competitive with the rest of the world.”

Cryptocurrency is a novel and electrifying asset class. It seems to be a red-hot asset class, and India needs to pave its way. Proper regulations need to be framed to prevent consumers from being conned by companies such as OneCoin. Probably, once crypto exchanges start embracing governance and investor protection guidelines meant for stock exchanges, risks allied with volatility can be taken care of

Cryptocurrencies might turn out to be a massive speculative bubble, but the ingenious technological innovations will transform the future of money and finance. It is for us to decide whether the future benefits and uses of cryptocurrency outweigh the risks associated with it and if these risks can be mitigated with appropriate regulation and benchmarks, and advancement in technology.

Conclusion – Looking into the Future

Cryptocurrencies have played a vital role in the last decade, and it is proved its potent to stay for the long run. Undoubtedly, the regulatory authorities have a significant role to play, but it is clear that the market is looking forward to an alternative to traditional currencies.

Its gaining prominence is one of the most popular digital assets, and it’s impossible to shy away from a trillion-dollar industry. It shall see positive growth statistics due to the technology growth spurred by the Covid-19 pandemic. As more economies drive change based on innovation, automation, and digitalization, we can expect the cryptocurrency market to develop at a pace set by the key participants. The current Managing Director of the International Monetary Fund- Christine Laggard, has said that cryptocurrencies have the same future as the internet itself.

Inadequate literacy and misinformation about crypto are other significant factors that impose resignation on cryptocurrency settlement in India. Yet, India mirrors an optimistic picture shortly for cryptocurrency with regulations. The focus should be on overcoming the price volatility associated with the first generation of crypto assets and creating a new generation of more stabilized cryptocurrencies, which will lead to a gain in investor confidence. Until then, the onus is on investors to research and invest and not on speculation.

Now the question is should India wait and watch or pave its path to be part of crypto-mania?